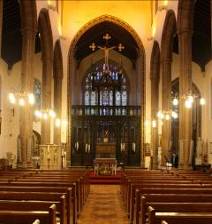 1792 marks the beginning of the Macclesfield mission when the Rev. Edward Kenyon acquired two rooms in Backwallgate for Catholic worship. Before that date Mass had been said at Sutton Hall, and when this was no longer possible, in the home of the Misses Orme. For a number of years a French émigré priest Rev L. Robin lived in Backwallgate and was responsible for the first Baptismal register beginning in 1795.

1811 saw the official opening of St. Michael’s chapel on Chester Road opposite the present church. It also incorporated a school. Mass was said there every fourth week. On the intervening Sundays prayers were led by a member of the congregation.

Maundy Thursday 1821 saw the arrival in Macclesfield of Dr. John Hall who was to have an impact on Catholic life, not only in Macclesfield and the surrounding area, but throughout Cheshire. To accommodate his growing congregation he planned a new church. A W Pugin was chosen as architect, largely under the influence of the Earl of Shrewsbury a noted benefactor of the Church. When the foundation stone was laid, the address was given by the Hon. Rev. George Spencer.

The church was opened 25th May, 1841, when the special preacher was the future Cardinal Wiseman. For a time the church served as a cathedral for the Diocese after the restoration of the hierarchy. In 1851 the Rev. James Brown was consecrated the first bishop of Shrewsbury. Fr. Hall was appointed Vicar General. The first Diocesan Synod was held in St. Alban’s in 1852.

Many embellishments were added to the Church during the incumbency of Canon Cleary (1910- 1937). He planned to raise the tower to its originally intended height but, more prudently the money was spent on strengthening the foundations.

Mgr. H.R. Kelly  (who, like Dr. Hall became Provost of the Diocese) was parish priest from 1937 to 1978. In 1939 the parish of St. Edward was founded covering the southern part of the town. Post-war building in the town led to an increase in Catholic numbers. Mgr. Kelly’s greatest legacy was the provision of a new primary school, and All Hallows secondary school (now All Hallows Catholic College).

Rev. C. Dwyer (1978-1991) undertook the task of re-ordering St. Alban’s church to reflect more nearly the needs of the new liturgical thinking after the Second Vatican Council. This work took place in 1982. When renovation proved too costly the old primary school, which had once housed St. Michael’s chapel was demolished and a new parish centre was built on the same site.

Father Peter Burke (1999-present) took St Alban’s into the 21st Century. With the St Alban’s church having become a listed building, the scope of all restorations and modification to the building became somewhat more restricted. Nonetheless, in 2003, conservationists restored the original Pugin wall decoration in the chancel. Five years later, new Pugin-like light fittings were installed. This followed work to replace the stone work around many of the churches windows and to restore the wooden floor in the nave.

2011 was a momentous year for St Alban’s. The Parish celebrated 200 years since its founding and the building of St Michael’s Chapel. Several events were held throughout the year, culminating with a Mass celebrated by Bishop Mark and past and present priests of the Parish. At the end of the year Father Burke celebrated his 40th sacredotal anniversary with a celebratory Mass followed by a social gathering of the Parish at All Hallows Catholic College.